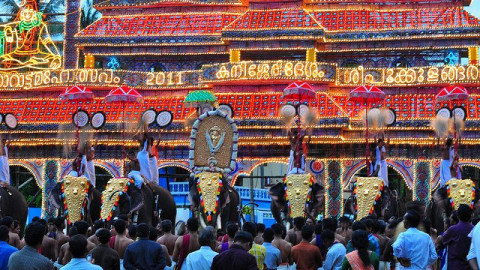 The Kunissery Kummatti is held in the Punartham asterisk in the month of Meenam which usually falls in the months of March/April.

Kunissery Kummatti is celebrated in relation to the historic military assaults of the Zamorin who advanced into the princely states. There are many different symbolisms of the Zamorin's Kovilakam in the festival of Kummatti.

When the Zamorin troops arrived at Kunissery, they were blocked at the border by the warriors of Kunissery.

The brave warriors put up a brave fight but got killed. The widows of the dead warriors prayed to the Bhagavathy and put a string resistance to the Zamorin.

The Zamorin could not advance. The legend says that the Bhagwati also became a part of the women who went to the battlefront.

The Zamorin was defeated and upon knowing that it was the power of the Devi that was the cause of his defeat, he surrendered himself to the Bhagavathy by offering his sword.

The Goddess was pleased and the Zamorin agreed to hold Kummatti festival on the Punartham asterisk of the month of Meenam.

This information is posted by someone who thought it might be useful for others like you. Please consider posting a local activity that you know.

Please select from the options below.